Keeping it multicultural in The Alehouse – Palmhof 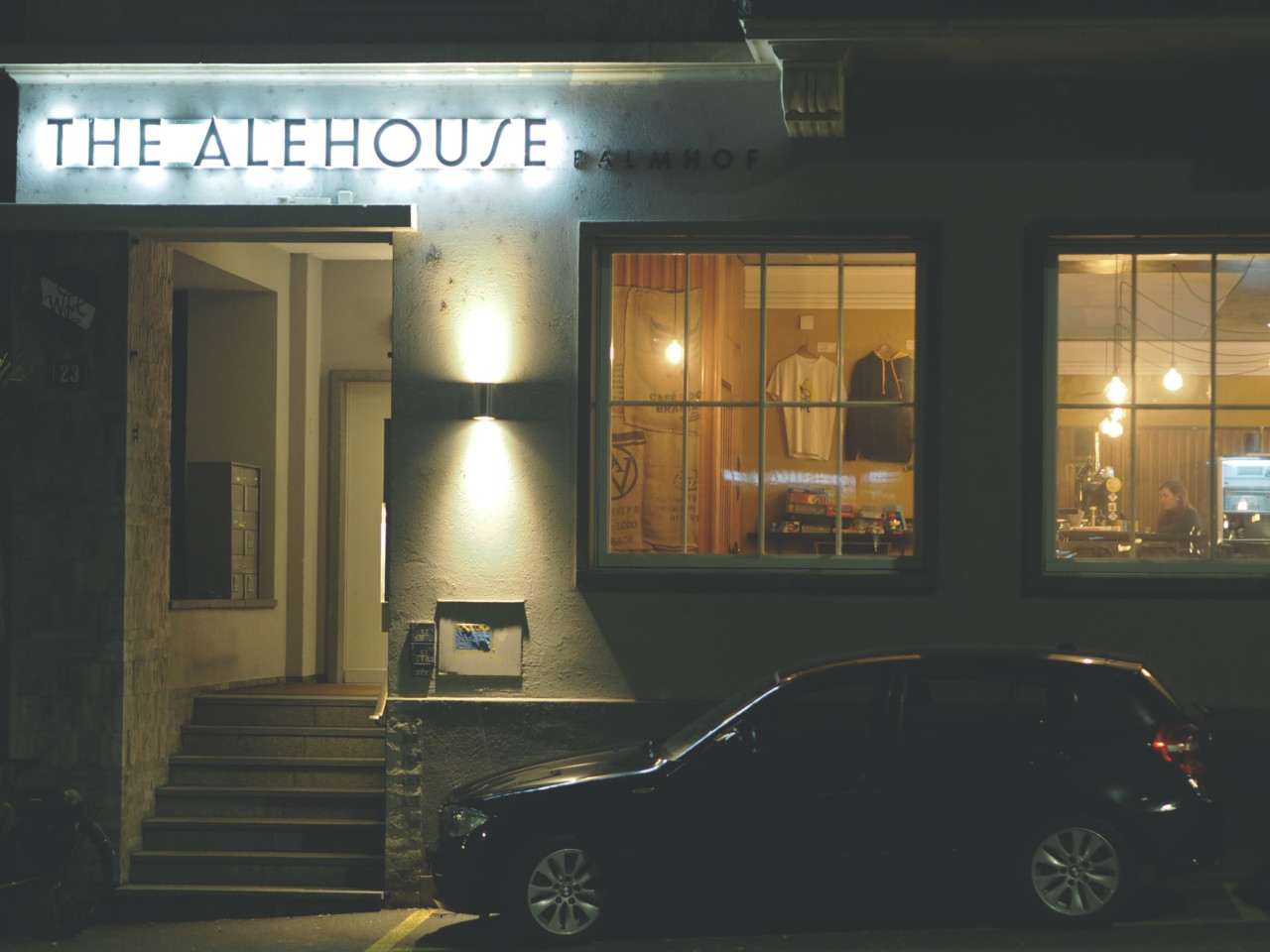 The Alehouse has left a lasting impression on me. Maybe it was the calm welcoming atmosphere, or maybe the myriad of multi-cultural influences, combined in a really subtle way that just works. Whatever the reason, it’s a place to visit more often.

I had driven past the Alehouse many times when taking the tram 10 back from the city centre to Oerlikon and had always been intrigued by this “pub” in such close proximity to the Uni.

Naturally I checked out the website and found my first surprise when looking at the menu. Burgers and Fish and Chips, real pub classics in the UK, next to Ramen?! Sounds like it shouldn’t work, but it does. I think it is due to the stripped back theme of the pub.

The Interiors: Light, Warm and Inviting

Wood is the predominant factor in the interior. From the floor, the massive wood tables to the wood panelled walls reminiscent of the 50s – 70s. The rest of the walls are a warm yellow, with the dark wood bar, chairs and bar stools adding depth to the lighter wood. There is also a second room with a beautiful petrol green colour to bring everything together.

The high ceilings and open feeling in the bar area extends from the unclutered interiors to the staff who are really friendly, knowledgeable and give a great service. There were a couple of essential things we wanted to try: fish and chips, ramen and fried chicken. While the first two were available, the fried chicken is generally only available as a lunch dish. However, the ladies helped us get the closest thing to it on the menu to make sure we got to try it all.

I just want to take a step back and consider those three dishes and the cultural heritage associated with them, because they are an example of what makes the pub so special. Fish and chips: the essential British dish. Ramen: one of the signature dishes of Japan and that is at its core, a mixture between a soup and a stew. Then finally Fried Chicken: having lived in South London for 3 years it has a really strong West African association for me and is a real comfort food.

What is exciting is that these cornerstones of the menu have been brought together in such a coherent way and are reflected in other parts of the menu and corners of the pub. The British is the most obvious in the vast selection of Beers and Ales – the core of the concept – and the pub feeling. The Japanese is reflected in a larger-than-to-be-expected selection of Sakes in the spirits section. The African influences meanwhile are fully on show with African style art on the walls and 100% Arabica coffee beans from Ethiopia.

Beyond those influences, however it has also retained the feel of a distinctly Swiss Pub. The spaces are very open, light and high – in contrast to the dark, cornered off rooms and booths you have in British pubs – with big windows to match and 50s – 70s style light wood panelled walls. I think that this 4-way fusion is what really excited me. Besides all those carefully curated influences they also have a whole corner with board and card games, which we played both before and after our meal.

Great Taste, a Full Stomach and a not too Empty Wallet

When the food arrived we knew that we had ordered too much, but were excited to try everything. The portion sizes are really good. The fish and chips, interestingly, had the same batter as the fried chicken – so don’t be disappointed if you are expecting a beer battered fish. While a new taste, one thing I can definitely say is that the fish was cooked on point. It was moist and fell apart with a light squeeze of the fork, just how it should be. The chips and sauce were also fantastic.

My highlight though, has to be the ramen. The udon noodles had a perfect consistency and were served in a pork-based broth with miso. The ground beef was different and certainly not bad. It was kept simple with a boiled egg, some vegetables and a little garnish. Not too spicy but with a nice hum.

Price-wise the Fish and Chips were around what you would expect, but Ramen was also the star in that category at 17 CHF for a huge portion. We finished the evening with a slice of the homemade coconut cheesecake to share, which lasted us for a good hour while we played one of the card games. I also had one of the coffees as an espresso, which was absolutely delicious.

The Alehouse is a great place to visit. It has a really special atmosphere and the overall experience is great, regardless of whether you are grabbing a quick portion of ramen between lectures, meeting a friend for a drink, even going on a date or in a big group. If you are looking for somewhere relaxed with some good food and a rich selection of drinks, you are sure not to be disappointed.